A message of peace for the young of Kashmir, Pakistan, India and the world.

As a Pakistani, I wanted to wish my #Indian friends well on their country’s Republic Day today. But then I saw this picture sent to me from India. I have to stop and join this young Kashmiri boy who wrote this message in the sand on Mumbai beach [see picture]. 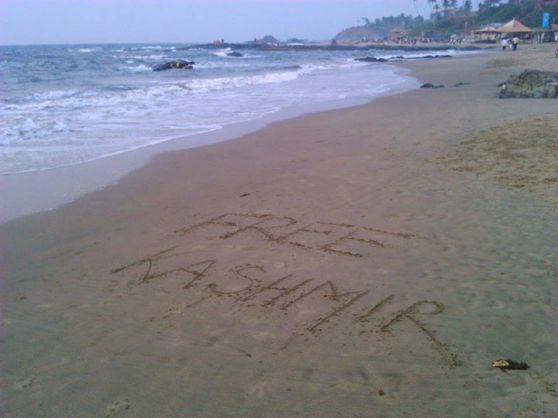 This is a strong message that has reverberated across six decades of brutal Indian military invasion and occupation of Kashmir.

Pakistanis are a hospitable people. We are generous, certainly more than the Indian government [see this http://j.mp/1hZy9rX].  No Indian visitor to our country has ever been harassed, even during wars. We are not phobic about Indian content on Pakistani screens, or books printed in India sold here. [Compare this to visiting Pakistani artists and sportspeople routinely threatened by Indian extremists. Even pigeons and stray dogs crossing the border into India are stopped and searched by Indian border security. So much paranoia and hate inculcated by the Indian government and political elite against Pakistan.]

So, today, January 26, is India’s Republic Day. I wanted to wish my Indian friends well. But my conscience tells me to stand by Kashmiri people as they mark the day as a Black Day.

Today, the world’s largest democracy has imposed a total ban on Internet and cell phones in Kashmir. They want to stop young Kashmiris from giving any interview to any international news organization that would show the world how Kashmiris are unanimously boycotting the Indian Republic Day celebrations and that they reject the invasion, occupation and the forcible merger of Kashmir into India.

This young Kashmiri in Mumbai had the courage to speak his mind, not fearing brutal Indian reprisal. All peace-loving Indians should stand by him, especially the younger generation of India. Stand by peace. Stand by Kashmiris. Don’t let hate and oppression pass on to another generation. Let’s stop it here because we can.

Young Kashmiris can’t speak up today because India has banned internet and cell phones. Therefore, it is the responsibility of all young Pakistanis, Indians and all the young of the world to step up and be the voice of young Kashmiris today. They are not alone. Spread the word.

This site uses Akismet to reduce spam. Learn how your comment data is processed.

Search in this blog